Hello. Tomorrow is a very important day in the Beckworth historical calendar and for once it would be opportune if residents actually took notice. For those still living in the dark ages, or the many with their heads stuck in phones ignoring the wonderous world around them, it is Fishfinger Fire Day. And to celebrate we are asking residents to wear the frozen foodstuff in their button holes, just as was done ritually until early last century. We tried to get it re-celebrated last year but no one joined us. Shame on you! So let’s try again. For those interested it was first noted in local history books over 335 years ago: on 19th February 1578 at 4.26am Beckworth almost lost it’s centuries-old fishfinger industry. Because in those early hours an accidental fire destroyed the town’s sole manufacturer and could have almost completely flattened the town and outlaying villages, had the gentle night breeze been really strong and the flames far larger. The fishy inferno was absent-mindedly started by the baker making the tangerine-hued breadcrumbs, which are of course still the most vital ingredient today (some olden things just can’t be improved on; even by computers and horseless carriages). Anyway, the ensuing blaze could have proved tragic if it wasn’t for the actions of a hirsute young navy officer home on leave: Lieutenant Lupin BirdEye. For he noticed clouds of orange smoke and a burning cod and bread smell coming from the open door of the fishy bakery as he came back from the pub fully-blootered. Acting alone and without recourse to phone the fire-brigade he simply improvised his very own hose whereupon he heroicly extinguished the fire. In honour of him saving a tray of charred and urine-soaked fishfingers (and most importantly the recipe) he was promoted to Captain. Ever since then he had his name and picture plastered over all subsequently made fish fingers, and appeared in wonderful adverts. That was until recently when his visage fell out of favour. So it is vitally important we honour the dear captain and don’t let his story die with the flames. So please, for once, join us and wear your orange cod stick with pride. Thanks, Bill Christchurch. Beckworth Historical Society. 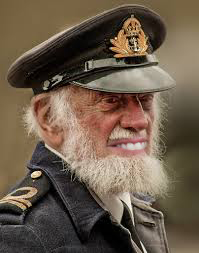 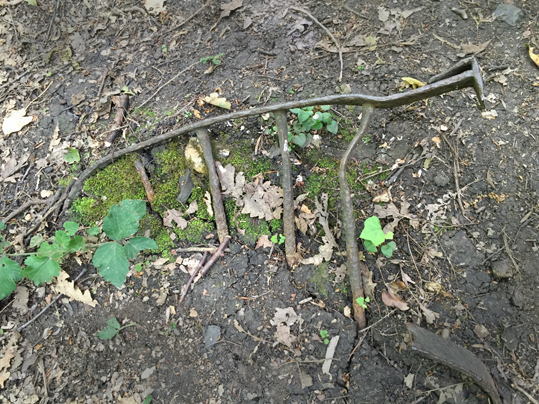 Hello. As you will doubtless know next Thursday is a very important day in the Beckworth calendar. It is Fishfinger Fire Day, and to celebrate we are asking residents to wear the frozen foodstuff in their button holes, just as was done ritually until the 1930s. As noted in local history books it was around 300 years ago, in 1578, that Beckworth almost lost it’s centuries-old fishfinger industry to a fire that ravaged the town. Accidentally started by a baker making the bright orange breadcrumbs the ensuing blaze robbed locals of their staple fish diet for months to come. But it could have been wiped out altogether if it wasn’t for the actions of a young navy officer home on leave. Lieutenant BirdEye noticed smoke coming from the neighbouring bakery and quickly extinguished the fire within using a flask of rum he had about his person. In honour him of saving the last few fishfingers, and most importantly the recipe, he was made May Queen of the town, promoted to captain and has had his name and picture plastered over all subsequently made fish fingers. So join us next week and wear your cod stick with pride.
Thanks, Bill Christchurch. Beckworth Historical Society.

(Above) A 16th century portrait of the Fishfinger hero Captain Birdseye

Hello. For those of you with a keen interest in local history this will certainly be of interest. Moving on from the successful renovation of the canal over the last few years, we are now looking for volunteers to help unblock and restore Beckworths’ Victorian sewer system to it’s former glory. It’s bound to be very dirty and smelly work but invaluable historical research (the water board are refusing to fund it, even though they were still using it twenty years ago. They have taken a defeatist stance saying it’s beyond repair). It’s a once in a lifetime chance for strong-swimmers, preferably with their own boiler-suits and breathing gear, to glimpse 19th and 20th century life through discarded toilet detritus and faeces. It is worth remembering that in their heyday the sewers (designed by Isambard Kingdom Brunel‘s adopted daughter Islington Kingston Brunel) were described as one of the seventy wonders of the world and were opened to the public by Prince Albert and his incontinent brother Prince Leopald Von Pitsburg, both keen sewer fanatics. Please email the secretary of the society Sarah Beeny for more details about volunteering. Many thanks, Bill Christchurch. Beckworth Historical Society. 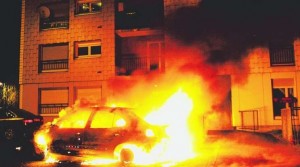 Who amongst us remembers the popular 1970s music show Lift Off With Ayshea? Screened weekdays on ITV just before teatime it introduced many of us under tens to the excitement of Glam rock, to Bolan, Bowie & Ken Dodd and to the allure of big hair and sideburns. How many of us yearned to wear full make-up and flares to school just like woodwork teacher Mr Stanner? I’ve found a picture of Ayshea (from the days when she lived in Beckworth) but couldn’t help wondering where she is now? If you know let us know! Thanks, Bill Christchurch. Beckworth Historical Society. 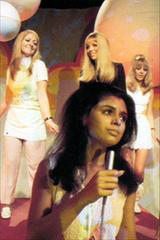 (Above) Ayshea filmed in Beckworth for her telly programme