Hello. we are so desperate to tell you about the 100 year anniversary of the Brownies that the girls have hacked this site (and in the process earnt their computer hacker badges). This weekend the local troop will be having a jumble sale in an effort to raise £250,000 for a bronze statue of Beckworth’s first Brown Owl, the late HRH Princess Margaret. The Princess founded our local troop in 1916 (just two years after the Brownies were first invented by the Suffragettes) as a way of helping the young girls get a vote and to stop them worrying about WW1s’ trench warfare and gout. See you at the jumble sale. Brown Owl 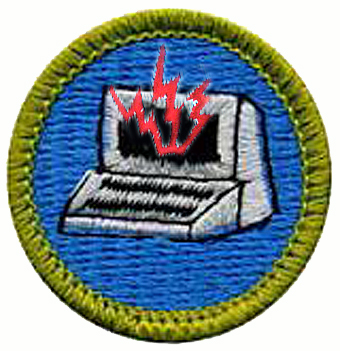 Just a reminder to parents and guardians that there won’t be a meeting of the girl guides tomorrow evening due to the pointless local elections commandeering the scout hut (with only 12 weeks notice I may add). It is most inconvenient as the girls were practicing for their abseiling and bungee badges and we’ve now had to pack all the gear away, which took myself and Tawny Owl an age last night (why we couldn’t have left ropes and crampons hanging from the hut roof God alone knows. Health and safety has gone completely mad). Ruth Freshford. Brown Owl. Beckworth Guides.