Happy New Year to all Beckworthians. I hope this message finds you well rested and ready to work extra hard this year (and decade). I myself have been away for my annual two week jaunt to the magical and hot far east and so once again missed out on Beckworth’s New Years’ eve (council funded) entertainment on the rain sodden sports field. I have been told by many of my staff that all went smoothly… The traditional death by burning of Old Man Beckworth (to say goodbye to 2019) eventually happened thanks to the last minute purchase of petrol from the 24 hour garage and the “birthing” of Baby Beckworth was a great success to welcome in 2020. Once again due to council cut backs there was no breathtaking pyrotechnic display this year, but the money saved is better spent going towards good causes such as having a new large TV and Alexa in the Mayoral office. Also worth a mention is that this year the Annual Beckworth Midnight Swim was well attended, with three people taking part, although one was unintentional and needed rescuing by our brave boys and girls of the fire brigade, bravo to them. So here’s to a prosperous new decade. Thanking you most warmly. Aashif Ackworth. New Mayor

Hello Beckworth, please let me remind you that we will have two minutes silence tomorrow at 11am, and that the public toilets will be locked out of respect. Thanking you most warmly. Aashif Ackworth. Mayor. Beckworth Town Council

Good afternoon Beckworth. I hope this message finds you well… This is a quick reminder that Beckworths’ famed Guy Fawkes night will be happening very soon, weather permitting. We are still debating whether this will be Saturday or at a push Sunday, but we promise tol keep you posted. We have a modest budget (that we’ve taken from funding young mothers’ yoga) to spend on a few fireworks and we’re promised a candle-lit choir, vegan food stalls and an effigy of Guy Fawkes lovingly made by prisoners on day release. Prof Brian Cox says he hopes to tell the story of the gunpowder plot if we pay him and for the under-5s once again the local Peppa Pig tribute band, Salty Boar, will be playing on a small open-air stage (some quickly tied-together crates).Thanking you most warmly. Aashif Ackworth. Mayor. Beckworth Town Council 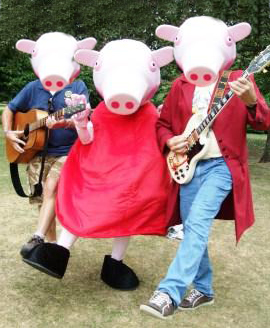 Good afternoon Beckworth. I’m sorry to be the one to impart bad news, especially this late in the day, but I have to inform all residents that I have taken Police advice and banned trick or treating once again this year… It appears to be the only way of keeping Beckworth safe this Halloween and comes after the ban was lifted last year which led to many, many reports of muggings by the town’s fearless under 10s. Most of the juvenile delinquents are believed to be travellers who camp outside the town from September to March (we’ve tried and failed every Autumn to get these scoundrels moved on but they claim their camp in forest near Beckworth is their “birthright” just because it’s called Gypsy Hill and the courts oddly agree with the blighters). Other young ne’er-do-wells are believed to emanate from the council estate so the police will put on more armed patrols on those litter-strewn streets. I know there will be an outcry from the vegan yummy-mummys and their Satan worshipping offspring, but I trust for the majority of us the ban will make enjoyment of all-hallows eve much safer and fun. Thanking you most warmly. Aashif Ackworth. Mayor. Beckworth Town Council

Hello Beckworth, or should that be “Howdy Partners”, I hope this message finds you well. I thought it best that I reminded you that this coming weekend we will be celebrating today’s US independence day. Thanks to sponsorship by Dunkin Donuts and The Trump Fellowship Of High-Earners we will be hosting a parade, followed by a rodeo on the Sainsco car park. We are expecting many visiting rodeoers and marching bands from the USA so please expect delays if you’re hoping to do your shopping on Saturday (and use buses as all parking in the town will be suspended). The parade will start at the library (at 11am) and is due to be opened and then led by President Trump’s very distant cousin Reg Trump, ex-local window cleaner and best friend of the betting office. Reg, if he’s sober, will try to lead our very own Beckworth cheerleading troupe and the scouts brass band through the packed streets of the town…

See you Saturday, Thanking you most warmly.

Hello Beckworth. I hope this message finds you well, and you are enjoying seeing the bunting your council has put up as a welcome to the Trump family to the UK. They were due stay in the caravan park just outside in Beckworth but their caravan got double booked so I hear they’re bedding down at a B&B in London… Anyway I am about to let a cat out of a bag. Yes I have a big secret to share! But you promise not to share… At 11am Mrs President Trump will open the redecorated Pamela Anderson Memorial Room in the library, and we  will be renaming it the First Lady Melony Trump Room in her honour (and as a thanks for her buying the paint, turps and brushes). I’m unsure if Mr Trump will be attending as his meeting with Prime Minister May may overrun… So if you free at 11 why not come along and cheer at Melony, I’m sure she will be pleased. Thanking you most warmly. Aashif Ackworth. Mayor. Beckworth Town Council

Hello Beckworth. I hope this message finds you well and that you had much enjoyment at today’s annual Beckworth MayDay Fish Race, I certainly did (I bet on the winning fish!). The race was thankfully only marred by one death this year, and surprisingly it wasn’t a fish… Sadly one of the spectators was taken ill, fell into the river (he was quickly pulled out so didn’t interfere with the race) and passed away on the way to hospital… Which was a shame as I’m told they missed a nail-biting race.

With 173 fish competing the race was watched by probably over two thousand people crowding the river banks and bridges, someone even sent up a drone. But as the town has a no fly policy the army cadets promptly shot it down and got a round of applause for its efforts. Though I say promptly it did take hundreds of shots before they hit it. They need more practice I think. Still it’s the thought that counts I am supposing.

The race was a nail biting from start to finish, as it was cold I waited in the cafe to see who crossed the finish line first, and I’m told many fish battled it out. Some were even disqualified for cheating and argy-bargy. In the end it was one of our oldest contestants, a 42 year old goldfish named Monkey Boy, that took the chequered flag in an almost record time of 1 hour 29 minutes and 14 seconds… This was the fish’s thirteenth race, he has trained hard year on year by owner and trainer Lorraine Kelly who says she would have had him put down and stuffed if he hadn’t won after so many races without a podium finish. This obviously spurred the fish on, so well done all. I am already looking forward to next years race. Thanking you most warmly. Aashif Ackworth. Mayor. Beckworth Town Council

Hello Beckworth. I hope this message is finding you well. I have just remembered to send out this reminder that this bank holiday Monday (the day after tomorrow) your wonderful town council has found the funding to be hosting the annual Beckworth MayDay Fish Race. To be held on the fast-flowing River Winnet if we have a sunny day of sunshine, if not the race will take place in Beckworth High School’s unheated swimming pool. It will probably be a fun morning for most of the family, but I am under strict orders to paste in this message of warning: I must advise you to please remember to keep all cats and caged, fish-eating, birds indoor. As in previous years we have had some entrants eaten before the race had started.

And now a message to all competitors: Could you please be bringing your race-prepared fishes (You should all have been issued with your race colours and unique numbers to paint on the sides of your aquatic entry) to the Pamela Anderson Memorial Room in the library at 9:30 for the weigh-in. The race will start at 10.45 sharp from the Ginsters Bridge, and the starter this year will be local morning telly star, and one of TV’s favourite cat loving advertising men, Pip Schofield. He has promised he will be leaving his kitten at home and attending alone.

Hello Beckworth. May I wish my residents a happy St Georges Day, a time for us all to celebrate the patron Saint of Great Britain and reflect on what it means to be British, no matter of your creed, colour or choice of football team. A time to come together, wave flags and cheer at a small parade as it makes its way quickly through the crowded streets of Beckworth, led by the Scouts and Brownies marching band, followed by some floats and a full-scale paper-mache knight attacking a giant dragon. The latter, which is cleverly mounted on a bike, was made by local school children a few years ago as a topical allegory in remembrance of both World Wars (or so I’m told. It made little sense to me when I first saw it. It doesn’t even look like a dragon, more like a big cat). After the parade has ended there will be a historical re-enactment on the sports field of George killing the dragon and a cream tea will be on sale. We had hoped for a flypast of drones but permission was not granted by the aviation authority. To make it a day out for the whole family pre-school children can have St George flag face painting. Thanking you most warmly. Aashif Ackworth. Mayor