Hello to my Coxettes (my dear fans), it’s your beautiful Prof Brian Cox here. I’m sorry I didn’t finish answering yesterday’s burning question “why are we having such hot days this week.” My neighbours and close friends Sir Brian May and his mum (ex-PM) Teresa May popped round with a bottle of sherry to have a natter and admire my fabulous hair and my newly whitened teeth (they were very impressed), which meant I didn’t finish giving the scientific answer…  So here goes, the UK is breaking temperature records (I’m told it was probably 38.1C yesterday, which is over 120 degrees in old money) because we’re being invaded by never before seen dessert plumes (tall winds to you plebs) travelling north from places like Iran, Israel and Japan. The plumes are blowing away fluffy clouds and bringing the most sunshine and daylight that we’ve ever seen… And because the UK is just like a big island, surrounded by deep seas and oceans, it feels even hotter and is making us crave cool Pimms and ice creams, which in turn raises temperatures. This creates a vicious circle, the more we drink and Cornettos we consume the hotter it gets… Today is cooler as most shops have now sold out of both, which is vey lucky… On a positive note I’ve managed to get a great all-over tan from nude sunbathing on my garage roof. I’m now going to show it off at the pub to best pals Amanda Holden & David Walliams. I don’t want to be late so better sign off…. See you soon, and keep the faith. Ta ta, Prof Brian Cox.

Hello. News just in, keen nut collector and local violin teacher Nigel Kennedy has discovered his second nut lookalike in as many years. “Everyone remembers the brazil nut i discovered that looked like Che Guevara…” Nigel reminded me over an early morning white wine-spritza “It sent shock waves around the World when it sold at auction for close to £1 million pounds. But the one I found this week is bound to get even more media attention as it’s a more popular type of nut and looks like one of the Worlds’ most famous women.” He then showed me a photo of an almond and asked if I could guess who it looked like? But as i’d not brought my reading glasses I couldn’t tell. “It’s the spitting image of Amanda Holden! Britain’s Got Talents most favourite judge” he exclaimed whilst topping up my glass. When i looked again and squinted I could see that, despite my blurred vision, the likeness was indeed uncanny. “And” he added “It’s appropriate the likeness is on an almond. Because I hear Amanda loves them. They were her favourite ingredient when she won Masterchef. My almond…” he continued whilst lighting a cigarette “was discovered in a normal packet of mixed nuts.The rest of the nuts were nothing special, but this one, which i’ve christened Almonda Holden, caught my eye. It’s got to be worth a couple of million at least, given her status on TV” Nigel then told me that once again people are claiming it’s a fake, that he drew the face on with biro and that it’s just a money making stunt. But as he said whilst I was paying the large drinks bill “It’s all mother nature’s work. And as we know, she moves in mysterious ways!” So good luck to Nigel and Almonda, I’ll let you know how they get on at auction. Yours Christine Batley. Chief Nut Lookalike Correspondent. Beckworth Guardian 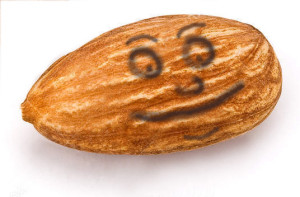 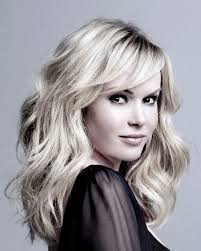 (Above) Spot The Difference: Almonda Holden and namesake Amanda Holden